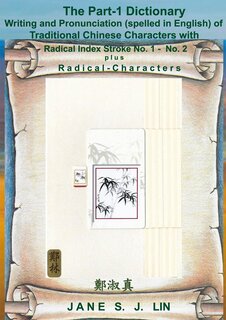 ◎This is the Part-One (Radical Index - Stroke No. 1-2) of Twelve printouts from the on-line dictionary that is currently under developing.
◎This unprecedented, intelligent, convenient and useful Tool provides “Pin Yin” (spelled in English) of Traditional Chinese characters.
◎Along with Stroke-by-Stroke writings for each character’s Radical and additional strokes, it is possible to learn Chinese ubiquitously.

The stroke-sequences for writing radical-characters are also included in a separate nineteen-page section with the order of radical stroke number and sequence.
All the multiple ways of “Pin Yin” will also appear under multiple English letters. However, an unique sort key for the Last Name found in 百家姓 (the Hundred Family Surnames) is highlighted and used for grouping the same Last Name in Traditional Character with different Last Name in English. For example, 鄭 can be found as Cheng, Jeng and Zheng in all 3 places with Cheng marked as sort-key. Therefore, all 鄭s will be grouped under Cheng when creating a roster.